India is home to many festivals and cultural observances. Foreign nationals when move from North of the country to South or vice-versa, get amazed at the number of festivals India celebrates. Most festivals have local or regional significance. Hardly any go beyond the geographical limits of a region. Since Indians follow their own lunar calendar, most Indian festivals fall on different dates on the Gregorian calendar. However, one festival is the exception to all rules. It falls on the same date on Gregorian calendar making it the only Indian festival that follows Solar calendar. Makar Sankranti, a day of dedicated to harvest of new crop, is celebrated throughout the length and breadth of country. It is called differently in some parts of country, but the spirit and zeal of celebration is identical.

Makar Sankranti also has huge importance in Indian Astronomy. Per Vedic culture, it’s on this day Sun starts its northward journey across the celestial sky. This is known as Uttarayaana. Sages advise to take bath in Holy Ganges. Many small and big melas are held along the Ganges riverbank where you can see the amalgamation of the Indian culture. Many foreigners visit India specially during this season to witness the Grand Melas on the banks near Ujjain, Allahabad; more specifically the Mahakumbh (held every 144 years; last held in 2001 and next scheduled for 2145!) at Prayag and GangaSagar Mela which is held at Bay of Bengal at the mouth of Ganges River.

In Southern India, One of the main celebration is Pongal, the first harvest of the year as celebrated by Tamils. It’s a three day celebration where on the first day people discard old things and bring in new stuff. On the second and main day, Pongal is prepared. An earthen stove is prepared in the patio or courtyard of the house. It is then decorated with freshly harvested flowers, banana leaves, sugarcane sticks and kollam. In a clay pot, milk is boiled and rice, jiggery, dry fruits are added to it. It is prepared under the Sun as a homage to the life giving energy of Sun.

In Central India, Fresh harvest is used to prepare different delicacies ranging from simple rice and daal porridge called Khichdi in Uttar Pradesh and Bihar to Fried sweetmeats in Uttarakhand and Puran Poli in Maharastra. One food that is almost synonymous with this festival is Sesame ball- you will get different version and different names in all places. Til laddoo, Til-gud, Ellu-Bella, Til chikki, tilkut, or Tilva – whatever the name be it is delicious and highly nutritious for young children, pregnant and lactating women. Other delectable one gets to taste are pheerni, pua, kheer, lai, etc.

In Punjab and Haryana, Lohri is celebrated with huge bonfires and sweetmeats, Sarson ka saag, and lots of buttermilk. And lots of bhangra! In Himachal Pradesh, people head to their local baoli to take the ritual bath. In the Kashmir Valley, it is celebrated as Shishur Saenkraat. In the North-East India, Bihu is both the festival and dance form associated with it. It is community celebration in Assam with large feasts for whole village after which young and old get together to tell old tales and participate in singing and dancing.

One more activity that is common to whole of India is kite flying. Humongous, colourful kites can be spotted in the sky in every city. Some even hold kite flying competition. But no other state is more enthusiastic about kite flying than Gujarat. Entire population of city come to the roof to cheer their favourite patangbaaz.

January 14th is also an important date in South-east Asian region. Bangladesh and Nepal celebrate it as Poush Sankranti and Megh Sankranti respectively and celebrated in similar manner as of India. Thai Songkran and Burmese Thingyan are celebrated mid-April and celebrate northward journey of Sun.

Importance of Saraswati Puja for students

Saraswati Puja is a special occasion for students all over India. Worship of goddess of learning holds special meaning in schools and colleges. Goddess Saraswati is an Indian Hindu deity who is associated with not only formal education of sciences and language, but also all forms of arts. On the fifth day of Magha, also known as Vasant Panchami, Saraswati Puja is celebrated by students from all walks of life in Eastern India.

Radiant in White, Goddess Saraswati mirrors absolute truth. Alternatively, she is also dressed in Yellow which is the colour of the season. White is favoured colour for Goddess as it symbolizes purity in knowledge. Even her vahana Swan is of purest white. Traditionally It has been known to separate milk from water i.e. Able to distinguish between good and evil. She holds these items in her hand:

Veena: It represents all the art form – music, dance, painting and other creative art forms.

Tamrapatra: It represents the Vedas and the science and knowledge that emanate from it

Rosary: Not your usual rosary, but one made of crystal lays emphasis on meditation and spiritual awakening which will lead us to God.

Fresh seasonal fruits like Indian Plum, Yam Beans, Black carrots are specially offered to deity. Coloured powder or Abeer is also an essential item in the ritual. White flowers or flowers in the hues of yellow are offered to goddess. A special mantra is recited to invoke goddess: 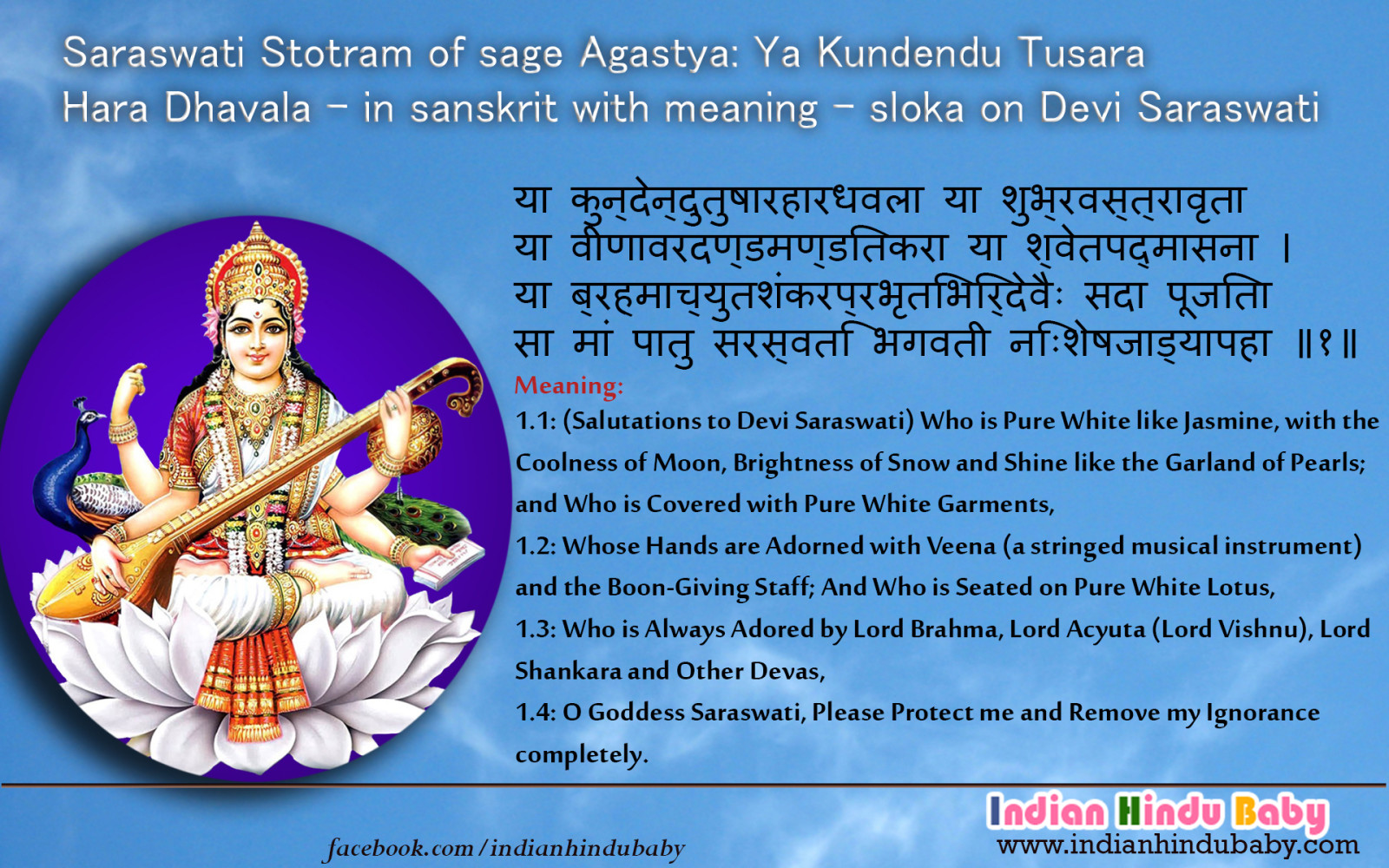 Meaning: She who is fair like Jasmine and dew drops, dressed in white, holding the majestic Veena in her hands, sitting on a white lotus, forever worshipped by Brahma, Shankar, Vishnu and other gods, O Mother Saraswati Bhagwati save me from ignorance.

In states of Bengal, Bihar, Jharkhand, and Orissa, a ceremony called Hathe Khadi or Khadi chuan is held on this day. Young children are introduced to learning. After Saraswati puja has been performed, the child, for whom this ceremony is held is placed in the lap of eldest member of family. Holding her hand, the letter “Om” is etched on the writing board. Sweets are then offered to everyone as a celebration of start of formal education of child. Earlier, the ritual was done with palm leaves and a special wooden pen dipped in red ink. Today, people use a writing board made of slate and chalk. Some even use pen and paper in case on non-availability of slate and chalk.

Almost all schools and colleges in these states celebrate Saraswati puja in a grand way. Students take a break from studying and celebrate the festival. An idol of the deity is brought a day before and on the day of puja, all students and every teacher join in worshipping Goddess. Girls wear traditional dresses in shades of yellow and boys in white. Some institutions hold a cultural extravaganza in the evening.